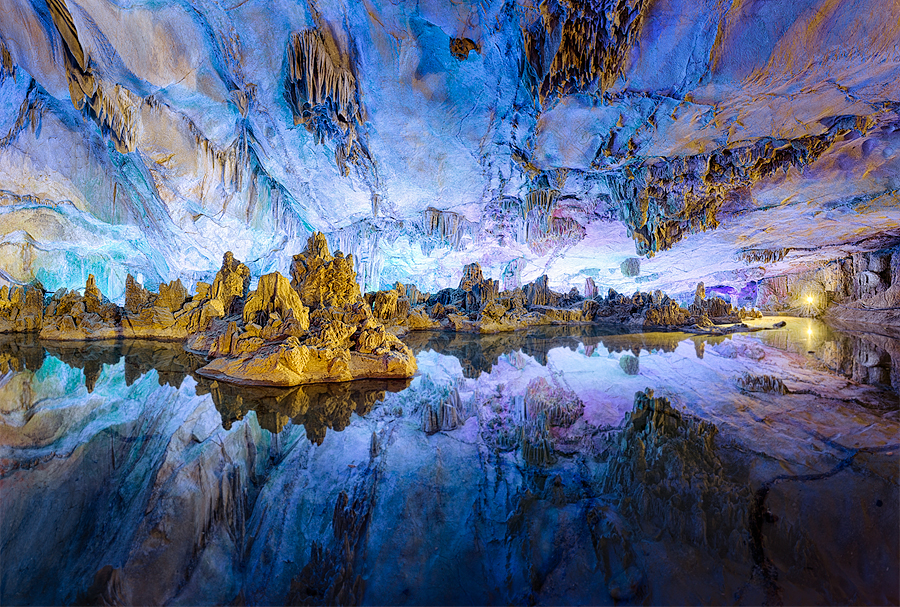 Enter the Reed Flute Cave, one of Guilin, China’s oldest and most popular attractions. The natural limestone formations are illuminated by an array of colorful lights that give it a wild and otherworldly feel. Throughout the interior, there are 70 ink inscriptions that can be dated as far back as 792 AD in the Tang Dynasty. That means people have been visiting this cave since ancient times. Although, I’m fairly confident the colored lights are a more modern addition.

It’s also worth noting that after spending 3 cold, overcast, and rainy weeks in southern China, I learned a very valuable photography tip. It never rains in a cave. 😉

After spending some time learning the sequence of lights, I was able to time and shoot a 4 shot pano and a series of long exposure brackets. Each of the 4 (vertical) shots were blended manually in Photoshop before applying the Photomerge function to build the Pano. After that, some more editing was done and though the saturation levels were adjusted, no additional colors were added to the scene. The full resolution file is 10,000 x 6750 at 300dpi.

Espresso: 100% Arabica from the Yunnan Province of China.