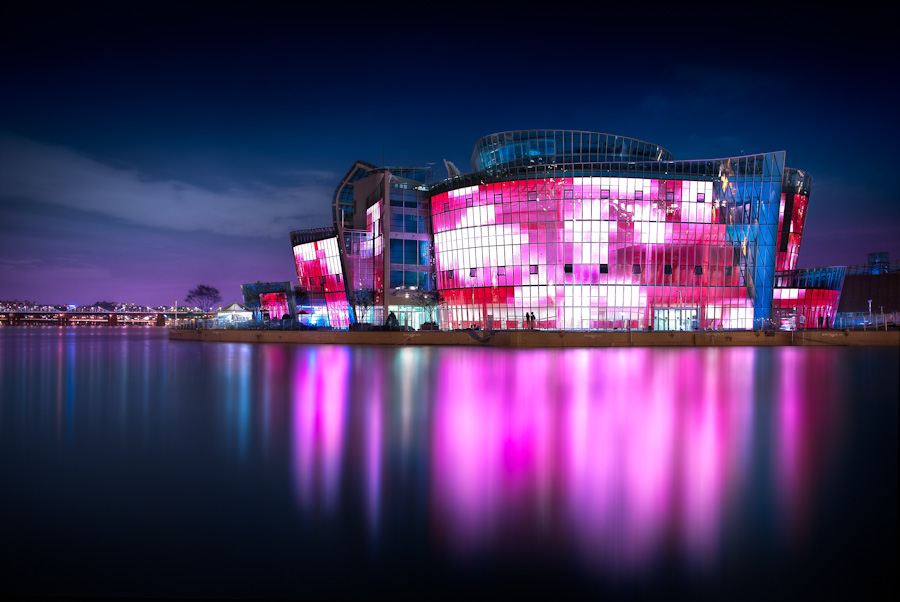 I got a lot of positive comments about this image in a debate topic called: The Watermark of Doom. It was actually a quite lively Google+ debate. If you haven’t done so already, it’s worth the read.

Creating the moment when you miss it.

Sometimes, it all comes down to using Post Processing to create the moment you missed. It’s also what the old school film guys refer to as: Lying. 😉 But this post isn’t about them, it’s about us. It’s about combining botched planning and digital tricks together into something harmonious and beautiful.

First off, I didn’t mean to shoot this at all. Yes, technically I placed my tripod, lined it up, and shot, but my intention was to shoot something else. Something that I planned out in complete detail.

Apparently, Banpo Bridge in Seoul, South Korea is famous for being the longest fountain show in the world. After some research, It became one of the main reasons I wanted to visit and photograph Seoul.

When I arrived in Seoul, I calculated the sunset time and position. Then I checked the schedule for the fountain show. Perfect, they run all day and also at a perfect 8:00pm spot post sunset. How about the weather then? Meh, rainy for the next few days so I might as well save it for later. Besides, what a great way to end a trip. It’s a giant fountain show after all.

On my last afternoon in town, I took a cab over to the bridge and set up in the perfect (pre-meditated) spot. I setup, sat back, and prepared for the show. I got there a bit early to shoot the 6pm show as well, wanting to have a few different lighting options to work with. It turned out there were these floating structures that you could walk on and visit. The one I set up on had a photography gallery of all things.

The clock rolled to 6 and… No fountains? What? Oh well, maybe they have it compressed down to a few a day. After all, everyone I talked to said they run every day without exception.

I went inside and found a nice woman who spoke great English. She told me that the fountain runs every day without exception and she didn’t know why it wasn’t showing. She said that the 9pm show is always enjoyable too. Ok thanks, I guess I’ll wait it out.

To cut this short, I’ll sum up by saying that it never happened. No fountains, nothing. As I was leaving I noticed that one of the other islands was covered in animated glowing colors. It was insane. I wish I would have known about it but it was obstructed from my view. None of the other islands were turned on so I had no idea it was there. All I could say was: WOW!

I always give my shots careful consideration with specific times of day and solar positions but sometimes you just stumble onto things. It’s inevitable and it’s something that I love about photography. Unfortunately, If I would’ve known about this awesome place, I could have shot it at blue hour, on a day with a light breeze. Instead, I was there in total darkness on a windy day.

Given the circumstances I did the most rational thing possible. I ran over there and did my best will total darkness, hoping to fix my problems in post. And guess what? It worked.

So, unfortunately I did not get to shoot the worlds longest fountain show. Instead, I ended up shooting the worlds largest floating Island. I can live with that.

First off I want to say that yes, this is an HDR with 5 bracketed exposures. I missed Blue Hour, so I re-created it. It was windy outside, so I blurred the reflections. There glow as animated, so I blended in the color from a single exposure. There wasn’t any purple in the scene, so I said, let there be purple. 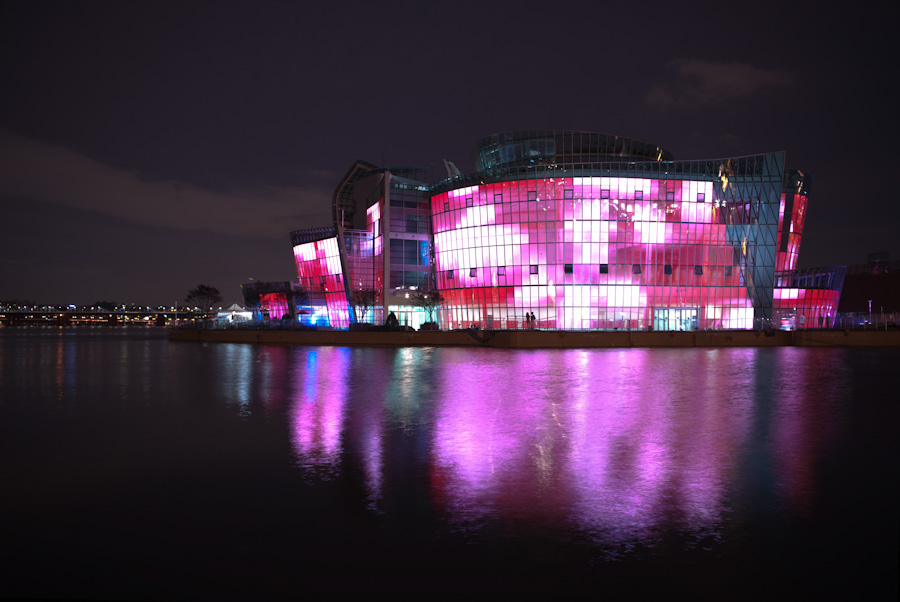